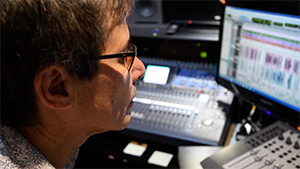 In the mid-1980s, John was the Senior Recording Engineer for Brisbane’s most popular 24 track recording studio ‘Starsound Studios’ located at QTQ Channel 9 Brisbane. At Starsound he was responsible for recording and mixing television and radio commercials, documentaries, music singles, albums and soundtracks for popular TV shows such as The Flying Doctors and The Henderson Kids.

After six years and numerous awards, John moved on to become the Audio Supervisor at BTQ Channel 7, Brisbane, where he gained a wealth of experience covering all areas of sound production, including, live to air television programs, national and international documentaries, outside broadcasts, dozens of national and local TV shows and location recording. Highlights included working within the creative audio team at the 1996 Atlanta Olympics and 2000 Sydney Olympics.

John believes that good quality audio plays a huge role in getting your message across and it’s something that you notice more when it’s done badly than when it’s done well. Great productions benefit from professional services and equipment.

We can also clean up and restore audio in a variety of formats and qualities to suit your purpose.

Our recording services are available at the well-equipped studio, located in Paddington Brisbane, or we can supply high-end recording and editing at venues conducting conferences, lectures or speeches.

If you’ve got some great podcasting ideas but don’t have the time or facilities – no problem! We can come to you with our top quality equipment, and help you put together a professional podcast audio product.

Need to know more?  Get in touch here.

WHAT OUR CLIENTS SAY ABOUT US:

Barry.Nilsson. engaged John and the Audio Advantage team in September 2018 to help establish the firm’s very first podcast, and he’s been an absolute dream to work with ever since. Being novice podcasters, we’ve heavily relied on John’s expertise and advice, and he hasn’t disappointed. He’s been nothing but helpful, flexible and patient while we’ve navigated our way through the first few episodes, and he’s managed to make us sound like real podcasters! I can’t recommend John and Audio Advantage highly enough.

“We have always been pleased with the professionalism of Audio Advantage. Viewmark Films have been making documentaries now since 2006 and have been using Audio Advantage services for several years.

“The high quality of our sound tracks for our films, are largely due to John and his highly professional staff.”- Gordon Lowe, Producer Viewmark Films Australia.

“As independent television producers, we rely on audio services a great deal. John Bosak is our first choice.   His professionalism and the ease of dealing with him make it a pleasure to complete our various projects.  Village to Villa produces television projects for worldwide distribution on both traditional broadcast and now digital platforms that require exacting standards.

“Our company has used Audio Advantage several times for very large jobs and have been extremely happy with their service. We have now made them our main supplier to use for all future work required.” – Christina Luestner, CIRCADIAN® AUSTRALIA

“Audio Advantage have been 2M’s reliable studio partner for 10+ years and we commend John on his expertise and impeccable customer service. Be it short voice overs for our exporting clients’ marketing videos, multilingual DVD productions for migrant communities, complex e-learning modules, or gaming apps – John and his team of engineers’ record, edit, sync and mix, meeting stringent technical specs and delivering quality recordings at all times. We have been extremely happy with their work and are proud to have John & colleagues as an integral part of the 2M Language Services team.” – Susanne Creak, General Manager, 2M Language Services

“John delivers the productivity and craft expected of producers, as well as the technical accuracy demanded by the Broadcast Industry.” – David Borgelt, Production Supervisor, Network 10 Brisbane